Major 19th-century US industrial center for paper and textile industries, known for its machine shops and water-power system

Known as the Paper City by 1877, this site was a major industrial center with extensive paper mills, textile mills, machine shops, and a water power system that had within a few decades transformed the fields of Ireland Parish into the manufacturing city of Holyoke. A group of Boston investors created the system of dams, canals, mills, streets, and boarding houses, which was incorporated as Holyoke in 1850. Built between 1847 and 1892 according to the original plan, the dam and canals provided work for Irish immigrants and the French Canadians, Germans, and other nationalities. During and after the Civil War, the demand for paper stock stimulated the growth of twenty-three paper mills, producing 150 tons of paper a day.

Machines, such as the Fourdrinier cylinder machine for paper-making, required large amounts of power and process water, which was supplied by the canal network. The machine shop and foundry produced looms, waterwheels, turbines, and wire-drawing machinery to name a few of the specialties.

By the 1870s, most mills in Holyoke were using Fourneyron-type wheels. When John B. McCormick came to Holyoke in 1877 he tested his Hercules turbine. In 1888 he perfected the McCormick-Holyoke turbine, manufactured by J & W Jolly Inc., which advanced water power significantly, doubling the output with an efficiency rate of 80 percent.

Clemens Herschel, hydraulic engineer for the Holyoke Water Power Company from 1879 to 1889, designed a new testing flume for hydraulic turbines, waterwheels, pumps, and meters. The Venturi meter used for flow measurement was originally devised to measure the water use of individual mills in the water power system. Herschel first tested the meter in 1886 and used it commercially in 1889. He named it for Giovanni Battista Venturi, an Italian scientist of the eighteenth century who demonstrated flow of fluids through pipes. 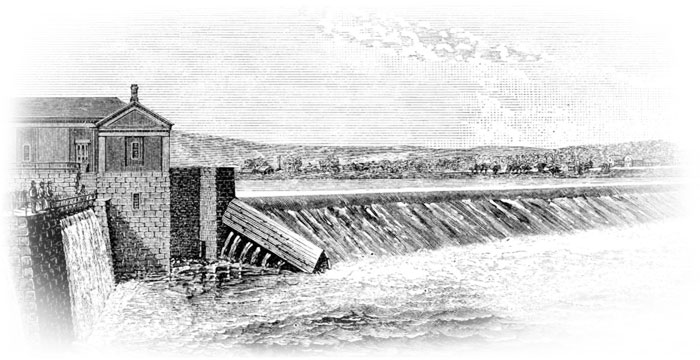