The only remaining Roebling machine was designed by Charles G. Roebling (1849-1918), engineer and president of the Roebling Company from 1876 to 1918. Built in 1893, it was the largest wire-rope closing machine in its time. The machine twisted six strands around a central core rope. These seven combined in the machine's forming die to produce a finished rope, a process known as closing. The machine was built to produce 1.5-inch rope for cable railways--80 tons could be loaded at a single spinning, which provided 30,000 feet of unspliced cable at a batch.

The demand for ever longer cable car ropes led to its design. It was a vertical machine, standing 64 feet, requiring the machine and building to be built as a unit. This and an adjacent rope room still exist. This machine was modified in 1968 to produced 5-inch wire rope, the largest at the time, for surface mining.

Charles Roebling, who graduated from Rensselaer Polytechnic in 1871 (civil engineering) was the third son of John A. Roebling (1809-1869), celebrated engineer of suspension bridges and founder of the wire and rope works. John Roebling, educated at the Berlin Polytechnic Institute, immigrated from Germany in 1831. As an engineer in western Pennsylvania, he began to replace the hemp ropes used on the inclined railways with hand- twisted wire rope.

John Roebling established his first wire rope manufacturing plant in the Chambersburg section of Trenton in 1849. Initially the rope was used in design and construction of suspension bridges by Roebling, including the Brooklyn Bridge. 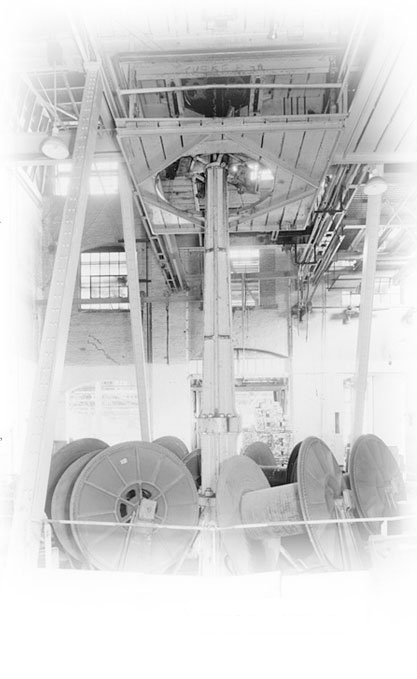 
By the 1880s, wire and wire rope were also produced for shipping and railway use, soon to be followed by recently developed technologies in electrical transmission, telegraphs, and elevators. Mining and cable cars also used the wire rope. Soon, the tramways and construction of the Panama Canal employed Roebling wire ropes. After the start of World War I, airplane rigging and controls called for fine wires.

The Trenton Roebling Community Development Corporation and DKM Properties Corporation are using the 80- ton rope closing machine as a centerpiece of an interactive museum-learning center for Trenton's industrial heritage.