This furnace was the focal point of a pre-Industrial Revolution industry town, one of hundreds of furnaces that thrived and failed in the 19th century. The Maryland Iron Company (incorporated 1828) built this furnace along the Nassawango Creek roughly four miles northwest of the Pocomoke River to produce pig iron by the cold-blast process. In 1836-37 the furnace changed ownership several times, until Thomas Spence of Worcester County purchased it and began producing pig iron at a rate of 700 tons a year. Spence is credited with the installation of the hot-blast stove. Iron was produced at Nassawango until 1847 when labor shortages and poor market conditions forced Spence to shut down the furnace. Laying idle and becoming overgrown, the furnace property was eventually donated in 1962 to the Worcester County Historical Society which cut back the 100-year growth and stabilized the furnace.

The Nassawango iron furnace is structurally typical of its period while distinctive in several ways: it smelted bog ore, it is principally of brick rather than stone, and of greatest significance, it is the earliest surviving American furnace that employed the "hot blast." By this means--now universally used--the production of pig iron was greatly increased. The cast-iron blast-air "stove" at the top of the furnace stack was installed here ca. 1835, less than a decade after introduction of the process in Scotland.

In a hot blast furnace, the combustion process is accelerated by heating (by means of waste gasses) air through a heat exchanger (stove) before it enters the tuyeres (air nozzles), where it is blasted into the furnace. The hotter furnace temperatures decrease the amount of charcoal fuel needed to reduce iron ore. 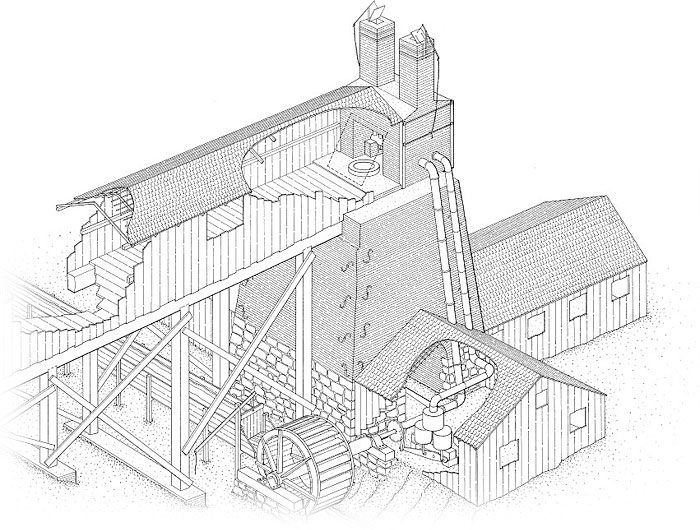