Commercial pineapple production began in Hawaii about 1890. Fruit was hand-peeled and sliced to match can sizes for export. In 1911 James D. Dole hired Henry G. Ginaca to design a machine to automate the process. As fruit dropped through the Ginaca machine, a cylinder was cut to proper diameter, trimmed top and bottom, and cored. This machine more than tripled production, making pineapple Hawaii's second largest crop. In the faster Ginaca machines now used around the world, the principle remains unchanged.

Henry Ginaca (1876-1918), whose father was a civil engineer, became a mechanical draftsman in San Francisco before going to Honolulu to work for Honolulu Iron Works. Ginaca designed the machine during his first year at Hapco and continued to improve on that design until 1914, when he returned to the mainland with his brothers, to try his hand at mining. Patents were issued, beginning (1,039,926) October 1, 1912, to (1,075,031) October 7, 1913. Though many "bugs" had to be worked out, Ginaca's machine was an immediate success, winning a gold medal at the Panama-Pacific Exposition in San Francisco in 1915.

James D. Dole (1877-1958), founder of the Hawaiian Pineapple Company (Hapco), had set out for Hawaii in 1899 and soon started growing pineapple on his Wahiawa plantation. Hapco was incorporated in 1901. Up until 1913 various hand-operated machines sized and cored pineapples, requiring hand cutting and no recovery of the skin material. The early Ginaca machines raised production capacity from 15 to 50 pineapples a minute and required only three to five operators depending on the amount of inspection performed. Later improvements increased production to 100 a minute. Ginaca machines were operating at Iwilei cannery in Honolulu at the time of designation. 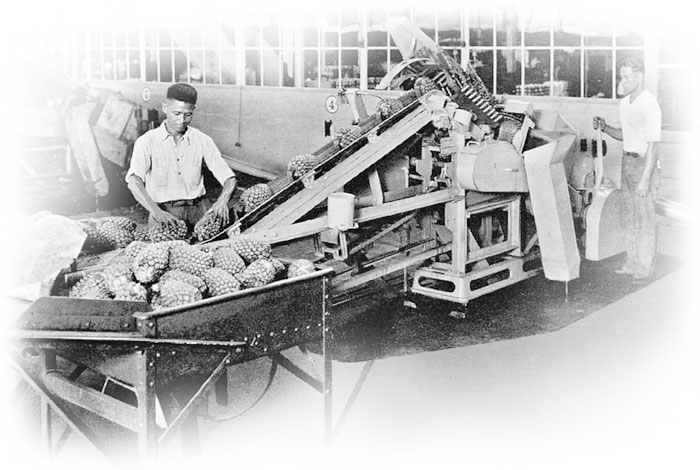 Ginaca machines cut cylinders out of pineapples, core them and remove that fruit which remains on the inside of the shells.