The 1895 discovery of oil underground at Titusville, Pa., required engines to drive drills and pump oil, but steam engines proved costly to operated. In 1898, Dr. Edwin J. Fithian and John Carruthers formed the Bessemer Gas Engine Company and produced kits to convert steam engines into the new internal combustion engines, fueled with oil-field natural gas. This gas engine, in service for 75 years, is a kit conversion of an 1880s Innis steam engine. It illustrates the transition to internal combustion and how machine life can be extended by clever adaptation of newer technology to save cost and resources.

This engine conversion is one of the very few remaining examples of a population of 10,000 engines used in the extraction of petroleum by the South Penn Oil Company from wells in New York, Pennsylvania, and West Virginia. These engines made possible the early development of the petroleum products that fueled the industrial development beginning at the turn of the 20th century until other petroleum deposits were discovered. Most of these engines gave reliable service until abandoned when the oil field were depleted beyond profitability.

This history is closely aligned with the history of the Bessemer Gas Engine Company, which merged with the Cooper Company in 1929 to become the Cooper-Bessemer Corporation. 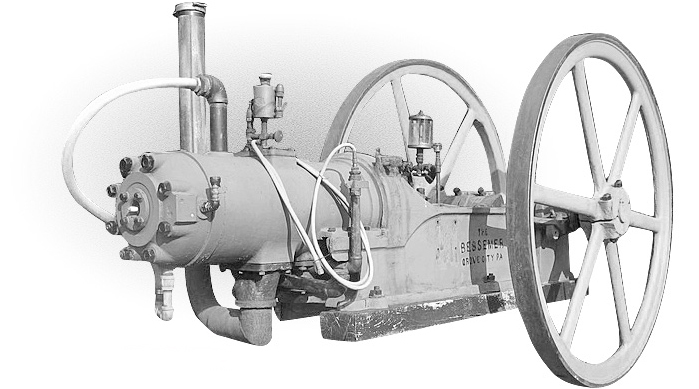 The engine is exhibited and operated at various old engine shows in Western Michigan and Northern Indiana during the summer and at the Coolspring Power Museum in Coolspring, Pa., during June and October. (616) 866-4888.