The Huletts were highly efficient materials handling machines unique to the Great Lakes. Invented by Clevelander George H. Hulette (1846-1923). The first, steam-powered, with a 10-ton-capacity grab bucket, went into service at Conneaut, Ohio, in 1899. It could unload an ore boat at the rate of 275 tons an hour.

Like later Huletts, these were electrically powered. The various motions of the 170ton bucket were controlled by an operator riding in a small cab in the vertical leg just above the bucket. Each machine could unload 1,000 tons an hour.

The Hulett's clear superiority over existing mechanical unloaders revolutionized ore handling and led to its rapid adoption throughout the lower-lake ore ports. Through 1960, more than 75 were built by Cleveland's Wellman-Seaver-Morgan Co. and its predecessor and successor firms. With the advent of self-unloading ore boats, most have been dismantled. This battery is the largest and oldest of those that survive.

Preservation of these four giants is highly contested, and those interested in helping this cause should contact a local preservation group such as the Friends of the Huletts and the Ohio Canal Corridor. 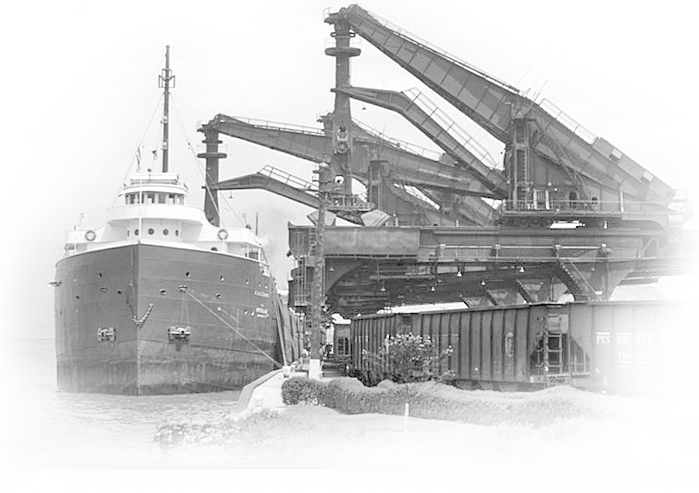 On the 100th anniversary of their invention and first placement into service, the most significant and remaining collection of Hulett Ore Unloader at Cleveland Bulk Terminal on Whiskey Island in Cleveland is facing a threat of demolition under request by the Cleveland-Cuyahoga County Port Authority and Oglebay Norton Company.

These Hulett Ore Unloaders as well as the Steamship William G. Mather were nominated and approved for designation as ASME Historic Mechanical Engineering Landmarks by the American Society of Mechanical Engineers (ASME International) in 1994. The Steamship William G. Mather was designated an ASME landmark on July 30th, 1995 and on August 2, 1998 at a ceremony attended by 488 aboard the Goodtime III, a Lake Erie and Cuyahoga River cruise boat, the Hulett Iron-Ore Unloaders were designated a Historic Mechanical Engineering Landmark by ASME International. The significance of the Huletts Ore Unloaders has also been recognized by many organizations including the Ohio & Erie Canal Corridor Association and in their master plan the Hulett Ore Unloaders stand out as the single most important industrial artifact in the Ohio & Erie Canal National Heritage Corridor.

On December 10th, 1998 the Port Authority, as the owner, and Oglebay Norton, as the operator of the Cleveland Bulk Terminal under lease from the port, placed a request for a Certificate of Appropriateness (permit for demolition) from the City of Cleveland Landmarks Commission. The review process can only stay the demolition of these irreplaceable and unique Mechanical Engineering ingenuity icons six months at a time and at most until December 10th of 1999 unless the Port Authority withdraws its request. A solution for the preservation of the Hulett Ore Unloaders can be found but planning and funding will require more time.

The time is NOW or NEVER for the Mechanical Engineers across the nation to rally and voice their position individually and in unison to preserve the most prominent and long lasting symbol of their fellow engineers contributions. Also include a statement in support of keeping the Steamship William G. Mather in Cleveland.

Ray Saikus, an ASME member, was Past Cleveland Section Chairman, and the nominator/organizer for the Steamship William G. Mather and Hulett Iron-Ore Unloader designations as ASME landmarks.

For a good perspective of the Great Lakes ore shipping industry, see information about the William G. Mather, another ASME landmark (#186), which is nearby.

The plaque was presented on 2 August 1998 to the Port of Cleveland, in ceremonies on board the Goodtime III. Almost 400 guests attended.