Water turbines from Kinne Collection
This collection was assembled by engineer Clarence E. Kinne (1869-1950) between 1907 and 1937. It is believed to be the largest collection of its kind in the world, representing American turbine development from a time well before the invention of the 'true' turbine to the evolution of the inward-flow reaction turbine used in today's largest hydroelectric plants.

All but four of the exhibits are located in the Stuart Lansing Memorial Room in the basement of the museum.The four remaining are displayed on the museum's south lawn.

Reminiscences about collector Kinne were delivered by grandson Edward Parker at the designation ceremony.

Kinne was born April 16, 1869, in Oneida County, New York, and died September 13, 1950, at age 81. A Life Member of ASME, he spent most of his career with Bagley & Sewall, a manufacturer of papermaking machinery in Watertown, New York (now GL&V/BC-K, USA, in Hudson Falls, New York). Kinne began collecting water turbines, in 1907, as they were discarded in favor of electric power. Most of this collecting occurred by word of mouth, as people learned of their availability (in northern New York). He was a discriminating collector, selecting good examples that represent the major changes in technology. He also wanted his collection to stay in Watertown (reportedly turning down an offer by Henry Ford Museum representatives), and it was displayed at the Jefferson County Historical Museum beginning in 1928.

At age 16, Kinne had apprenticed at a machine shop in Camden, New York (later called the Camden Waterwheel Works). In 1891 he began working at a locomotive shop and building steam engines with the Watertown Engine Company. In 1893 he began drafting work with Bagley & Sewall, eventually working his way up to chief draftsman, mechanical engineer, superintendent, vice president, and then president. Upon his death, he left the collection of water wheels as a memorial to the importance of waterpower and technology in the development of northern New York and the entire world. The following speech was delivered by Edward K. Parker, grandson of Clarence Kinne, and was given June 19, 1999, at the ceremony designating the Kinne Water Turbine Collection as an ASME Historic Mechanical Engineering Collection. - introduction from notes by Fred Wenthen, P.E.

My grandfather was a very interesting man. He had a tenth-grade education but was very widely read and could quote Shakespeare, Walter Scott or Robert Burns whenever the occasion called for it. He was very much a family man who had nine aunts and uncles and innumerable cousins and kept in touch with all of them. His maternal great grandmother was a niece of George Stephenson who, with his son Robert, developed the first practical steam locomotive, the Rocket. He knew education was very important, and he studied advanced mathematics and other engineering subjects privately whenever he could. When he came to Watertown, he taught drafting at the YMCA and took other courses there. As chief draftsman, he became very familiar with every part of a paper machine. He became a member of ASME in 1899 and a life member in 1901. Whenever he was in New York City, he always visited the ASME Library. He usually found old friends there. He was "grandfathered in" as a professional engineer by the State of New York with certificate number 92 in 1921. Grandpa spoke excellent English but had no foreign languages. His business letters from France were translated by my mother.

Grandpa was a great collector. He not only collected water wheels, he had a very large stamp collection, quite a few very old drafting instruments, a number of model steam engines and a large collection of slide rules and calculators (the old-fashioned kind). There were many different kinds of "slip-sticks." Some of them looked like pocket watches. Some were for making very specialized calculations. I remember, during the war, prying a flight calculator off a navigation table in a wrecked airplane to send home to him. He even kept the license plates from his cars for the years 1917 to 1948, tacked up on his garage wall. 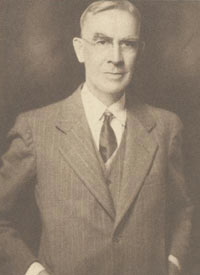 Clarence E. Kinne
He had a great interest in historical matters. In addition to being president of this historical society for 12 years [1935-47], he often borrowed famous people's diaries and surveyors' field books and copied them. He kept his own diaries from 1885 to 1950 when he died, and they are fascinating reading. He starts off each day with a description of the weather, followed by what he saw, whom he met, where he went and what he thought about it all. For example, he didn't like daylight savings time. He said it was like having 14 ounces to the pound or 30 inches to the yard. His niece, now 87 years old, told me that during the summer, he carried two watches, one always on what he called "railroad time."
During his years with Bagley & Sewall, he traveled a great deal and all of these trips are recounted in his diaries. He learned to drive and bought his first Buick touring car in 1917. He used this more for Sunday driving and short trips and used the railroad for other travel. It amazes me to read how frequently the trains ran and what good connections you could make in those days. In his inside suit coat pocket, he always carried several used envelopes on whose backs he had made notes and calculations and the latest New York Central timetable. At the end of his rail trip, he might rent a horse and buggy or take an interurban car or a trolley car. At a remote paper mill, they might send the company locomotive to pick him up. Sometimes he would register at the hotel and then walk several miles to the mill. He was a great walker. He thought nothing of going for an 8-mile walk on a Sunday afternoon.

He not only traveled extensively in this country and Canada, but he went to France, Great Britain, the Philippines and Japan, taking orders for paper machines and seeing the country at the same time. Closer to home, he often took me to see paper mills, the roundhouse and water purification plant here in Watertown. He was always designing something. He laid out a large sundial for his garden, had a pattern made and had it cast in bronze. He saw a door knocker he liked on an old house, sketched it, and had a pattern and a bronze casting made, and it is now on the door of my house.

It was a great treat for me when he would "show me about the plant," as he put it, at Bagley & Sewall. He seemed to know personally everyone who worked there. I especially liked it when the foundry was pouring and we saw the molten iron flowing and the sparks flying. He showed me the machine tools with all their exposed belting and had the operator give me a ride in the huge overhead crane. Today, OSHA would have a fit! From the time I was a baby, he would take me the three blocks down the street in the late afternoon to see the train come in from Carthage and to wave at the engineer. Even after he had had a couple of strokes, he would go down there by himself and wave. After his last stroke, my grandmother answered a knock at the door to find the engineer there, asking about Mr. Kinne.

He had other business interests beside Bagley & Sewall. He was an officer of the Watertown Savings Bank and often helped audit its books. After his retirement from Bagley's, as president of the company, he was the president of the savings and loan. He knew a great deal about hydrology of the Black River and was sometimes called to testify in court cases involving water power. He served on the Board of Health of the City of Watertown but got himself transferred to the Board of Water Supply with which he felt he would be more familiar. He was a Methodist who often went to other churches and served on the board of his own church. Whey Asbury Methodist Episcopal Church was built, beginning in 1910, other board members wanted a tile roof. He was against it and said, in this climate, it would leak. They built it anyway and found out he was right. It now has a composition shingle roof the color of the tile.

He taught me a lot about being honest and upright because he was the man in my family after my father died when I was six. He told me once that, if you like what you are doing, the money will take care of itself. You know, he was right!