This 75 horsepower type Y, style VA engine, which was used to power electrical generating machinery, is an outstanding example of early high-compression, cold-start, full-diesel engines (having no pre-combustion chamber) developed in the United States. It is a descendant of the first successful diesel engine produced in 1897 by German mechanical engineer Rudolf Diesel.

Similar engines driving DC and AC generators provided economic, reliable electric power in many remote locations such as Useppa Island during the nation's electrification in the first half of the 20th century. This particular engine (the landmark artifact) dates from 1924, and it has a serial number 591532.

The simplicity in the Y-VA's design, overall economy of operation, and dependability are significant. Its simplicity results from the manner in which the 2-cycle and airless injection principles have been utilized and in its few moving parts, all enclosed and automatically lubricated. The crankcase, equipped with automatic annular ring valves, acts as a pump for the scavenging air, common to type Y engines since 1914. Other design features include long-skirt pistons, differential-type needle valves operating automatically with fuel pump pressure providing direct injection, and the primary advancement of not requiring a precombustion chamber.

This installation is an excellent example of early full diesel engine technology of the times. By the mid-1920s, steam engine driven electric power plants were being replaced by diesel engine driven machinery in many communities. It was used for lighting, refrigerating, etc., especially to isolated areas, a time in which electrification was spreading and becoming a dependable, economic, and efficient power supply. The parent company of Fairbanks-Morse began producing engines (naphtha-burning) in 1893. These evolved to engines burning kerosene in 1900 and coal gas in 1905, then to semi-diesel engines in 1913 and to full diesel engines in 1924, with compression being raised (from 80 horsepower in 1894) to about 500 psi.

The Y-VA engine was the first commercial version of a high-compression, cold start, full diesel developed by Fairbanks-Morse (now Fairbanks Morse Engine Division of Coltec Industries), without the acquisition of any foreign patent. This machine was developed in Beloit, Wisconsin, and introduced in 1924. It became very popular as a stationary prime mover, providing reliable power to sawmills, cotton gins, and stamping mills, as well as electrical power generation. 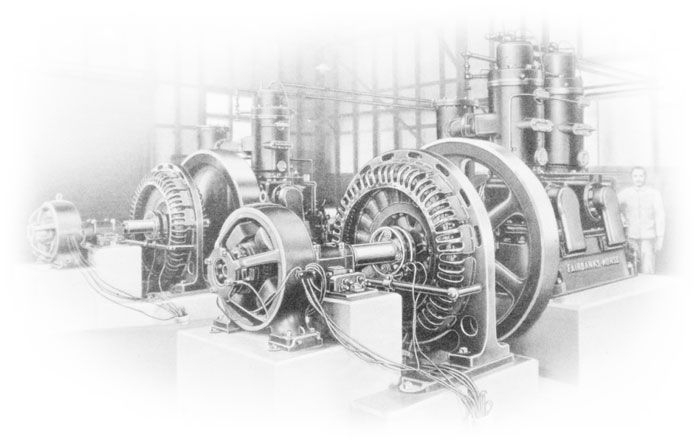 Fairbank's Morse Type 'Y' semi-diesel oil engine. Photo: Fairbanks-Morse Co., of Campbelltown and Airds Historical Society Inc.
Comments from Visitors/Members:
Contact: Historical Society President Barbara L. Sumwalt, 941-283-1061. Site is accessible by water from nearby Pine Island, by boats operated by the Useppa Island Club. Permission to inspect the power plant machinery should be requested from Mrs. Sumwalt This landmark site is one of the most historically interesting islands in the Charlotte Harbor and Southwest Florida area, with an excellent museum describing the past history of habitation and activities from prehistoric times to the present. The museum is also a field station of the Florida Museum of Natural History.

Involved in its development