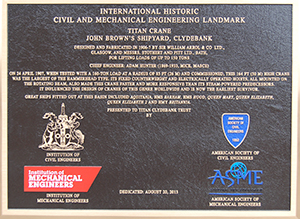 Ottmar Mergenthaler started to develop the Square Base Linotype in 1882 in Baltimore, Md. The linotype, unlike Gutenberg's printing press, did not use moveable type. Instead, it functioned like a typewriter: the operator sat at a keyboard of 90 characters and typed copy.

With each keystroke, the machine released a brass matrix (or mold) for that letter or a blank band for a space, and it arranged the letters and spaces into a justified line. Next the machine automatically tapped a reservoir of molten pot metal (heated to 550° F, 288° C) to cast a slug from the justified line of matrices, producing a single line of type — hence the machine's name. Each successive slug was trimmed and ejected from the machine, forming columns of type ready for assembly into pages for the press. After casting each line, the machine automatically sorted the matrices, ready for reuse.

A Square Base Linotype had 5,000 parts, and cost $1,000. Thomas Edison called it the "eighth wonder of the world." Thanks to its efficiency, reliability, and durability, the Linotype allowed further growth in the number, circulation, and size of daily newspapers, while lowering costs in book publishing. Its productivity improvements also aided compositors' efforts to achieve a nine-hour working day.

In all, the Mergenthaler Linotype Company sold 366 Square Base machines to customers around the globe before its replacement by a long line of improved designs, beginning with the Simplex in 1892. These durable machines remained in use until photo-offset printing succeeded hot-metal composition during the 1970s. The Square Base machine that received the ASME's designation as a Historic Mechanical Engineering Landmark was made in 1890 for the Providence (Rhode Island) Journal. One of only two Square Base machines is known to survive; it is displayed at the International Museum of Printing in Carson, California.