Representing some of the most significant collection of 19th century tools and machinery for the manufacturing of textiles.

ASME Past President Harry Armen presented the commemorative landmark plaque to American Textile History Museum Board Chair Karl Spilhaus and President and CEO Jonathan Stevens.
Referred to as the "catalyst of the Industrial Revolution," textile manufacturing helped to transform the American economy from an agricultural to a manufacturing economy. It led to transitions from human to mechanical power and from wood to metal construction. Population shifts resulted from significant numbers of people moving from rural areas to work in urban factories. The collection of tools and machinery housed at the American Textile History Museum (ATHM) represents a collection of ideas which developed during this period. 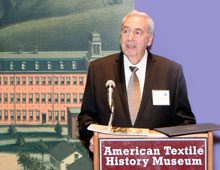 ASME Past President Harry Armen addresses ceremony attendees at the American Textile History Museum.
There are more than 250 spinning wheels and more than 300 examples of industrial-era textile machinery at ATHM. Among the highlights are: a Cotton Gin, Prattville, Ala., between 1873 and 1899; an Artemus Dryden Woolen Card, Holden, Mass., circa 1825; a Four-part Wool Card Line, Bridesburg, Penn., c. 1870; a Throstle Frame, Lowell, Mass., c. 1835; and an M.A. Furbush & Son Power Loom, Philadelphia, Penn., c. 1870. 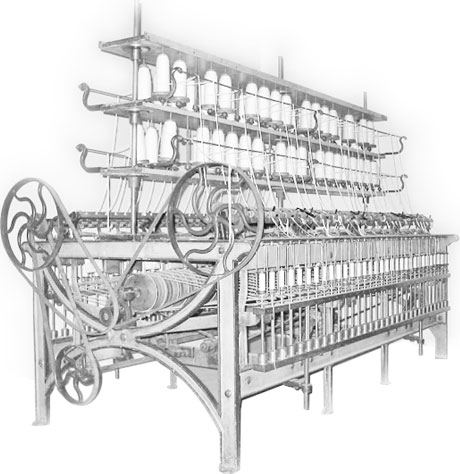 Throstle frame, c. 1835. The Lowell Machine Shop made this and many other first-generation American mill machines.