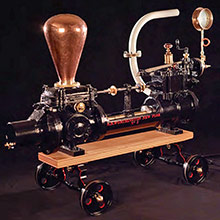 Replica of Model of the original Worthington Pump.

Developed in the early 19th century, the invention of the direct-acting steam pump by Henry R. Worthington spawned an industry that became a major manufacturing segment in the United States. To this day, the Worthington steam pump has applications in waterworks, mining, petroleum refining, pipelining, marine, the nuclear industry, and myriad processes involving fluid movement.

A significant historical application of the Worthington steam pump was its inclusion in the USS Monitor, an iron-hulled steamship built during the American Civil War. With the knowledge that the Confederacy was creating an iron ship to break the Union blockage of Southern ports, the U.S. Navy began the construction of its own in Greenpoint, Bklyn. Designed by Captain John Ericsson, the ships constructed included two Worthington direct-acting simplex steam pumps for pumping feed water, bilge dewatering, fire fighting, and as general service pumps. Due to their compact size, and light weight compared to flywheel and beam pumps of the day, these features were vitally important in marine applications where space was limited.

The first ironclad warship commissioned by the Union Navy, the Monitor is most famous for her central role in the Battle of Hampton Roads on March 9, 1862, where she fought the casemate ironclad CSS to a standstill. The Confederates were forced to destroy Virginia as they withdrew in early May, and the first-ever battle fought between two armored warships marked a turning point in naval warfare.

An earlier generation of Worthington's pump at King's Cross Station, London, 1852. It’s schematic is most like that of the Monitor's. Proceedings from the Institute of Mechanical Engineering.

Mon. to Sun. 9am – 5pm
Closed Thanksgiving and Christmas
http://www.marinersmuseum.org/hours-and-admission/

Aug. 26, 2016
Plaque Presented by ASME Past President Reginald I. Vachon