The Rainhill Trials were an important competition in the early days of steam locomotive railways. The Liverpool Manchester Railway was the first railway to rely exclusively on steam power.

One of the earliest known examples of a program engineered to evaluate competing machines, the Rainhill Trials were a competition between five engineers to run a steam locomotive up and down a one-mile track. Cycloped, Novelty, Perseverance, Rocket, and Sans Pareil raced from Oct. 6-13, 1829. Designed by Robert Stephenson, the Rocket outlasted the others, and introduced a design that became the prototype for subsequent steam locomotives.

William James designed a plan for a line of engine railroad from Liverpool to Manchester after having seen a Newcastle locomotive, and experiencing high tariffs on shipped goods and materials on Manchester & Liverpool canals in 1821. George Stephenson was responsible for constructing the line while Robert Stephenson and Henry Booth developed locomotives. Railway construction began in 1826 and was completed in 1830. The railway gave Manchester mills direct access to Liverpool docks and broke a canal monopoly.

Opened on September 15th, 1830, the Liverpool and Manchester Railway (L&MR) was the first of its kind: it relied exclusively on steam power, was powered entirely by its own motor, had a signaling system, was entirely double track, and carried mail.

Still operating on its original alignment with many original structures, this railway established the basic format for almost all subsequent railways and rolling stock world-wide. 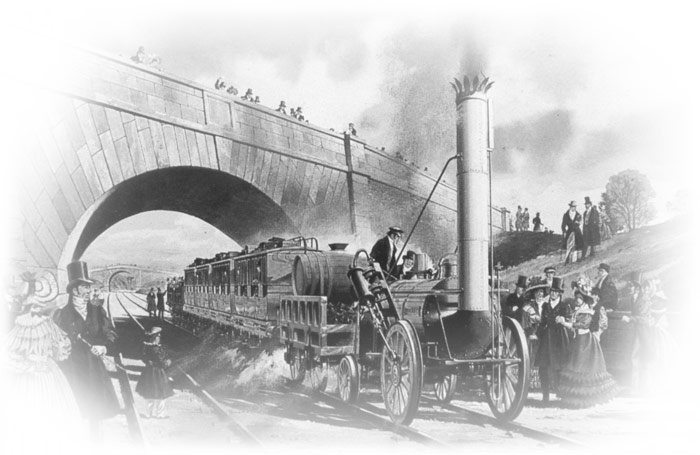