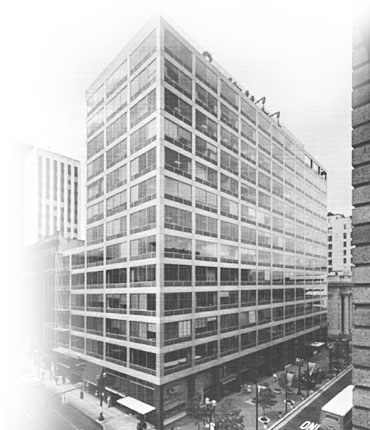 The use of heat pumps for the heating and cooling of the Commonwealth Building, initiated in 1948, was a pioneering achievement in the western hemisphere. The theoretical conception of the heat pump was described in a neglected book, published in 1824 and written by a young French army officer, Sadi Carnot. Its practical application on a large scale is attributable to designers J. Donald Kroeker and Ray C. Chewning, building engineer Charles E. Graham, and architect Pietro Belluschi.

Following a World War II moratorium on construction of commercial buildings, this unique all aluminum-clad building received the first permit and became a standard style for several decades. Though located in a moderate climate, the building requires air-conditioning because it has no opening windows.

Kroeker designed the heating, ventilating, and air-conditioning system with special features that included heat recovery from ventilation exhaust air and use of waste cooling water to heat incoming ventilation air. The 14-story building has separate heating and cooling circuits controlled by thermostat. The basic heat pumps are four condensing units that pump water from two warm wells. Two units use Freon 11 and two use Freon 113.

Important Note: The building was built as the Equitable Building. The name changed in the early 1980's.

Comments from Visitors/Members: 1992 Survey by Carl N. Petterson: General appearance of the heating and cooling system looked good. It is fully functioning. Unfortunately the building is sound but needs some maintenance. Vacancy rate is too high but the location is good. This building was the first modern curtain-wall building in the United States. Architect Piero Belluschi was an AIA Fellow. It may be an AIA landmark.

NOTE: Survey points out name change from the Equitable Building to Commonwealth Building. This change took place in 1980-82, about the time of the designation ceremony. ASME never changed from the name underwhich it was nominated, but did recognize by the late 1980s that another building had been built in Portland that is named the Equitable Building. ASME needs to dispel confusion between the two buildings by using the Commonwealth name, the building engineer's name (Graham), or the architect's name (Belluschi).