These two water turbines were probably the largest and nearly the most powerful ever built in the United States, supplying direct mechanical power to a manufacturing plant. Their installation between 1871 and 1873 makes them among the oldest surviving water turbines.

A dam at Cohoes diverted water to mills and factories along a power canal system. The vertical-shaft turbines at the mill were said to run at 800 horsepower (600 kilowatt) under a head of 20 feet and were connected to an overhead shaft by bevel gearing. Large pulley belts reached from the common horizontal shaft to the line shafts on five floors.

Uriah A. Boyden (1804-1879) invented an outward-flow turbine in 1844 that improved the performance of the Fourneyron turbine and was, in time, superseded by the Francis-type inward-flow machine. 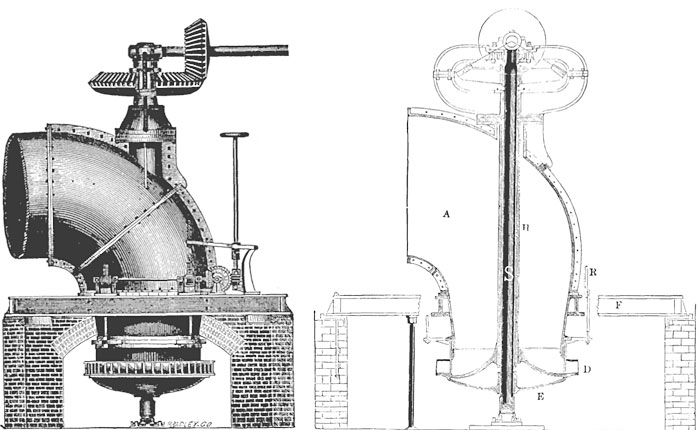 Boyden type turbine manufactured by the Holyoke Machine Company. This is not one of the Landmark turbines but is an illustration of a similar machine taken from the company catalog of 1876.