The most powerful steam hammer in the world for many years

The introduction of steam-powered forging hammers by French and British engineers of the 1830s led to the building of this impressive hammer at Creusot that delivered blows to shape and strengthen iron and steel objects before forging. It was for years the most powerful steam hammer in the world. Yet in 1878 a writer observed that "this formidable mass is capable of... corking a bottle without breakage."

With a striking capacity of 100 tons and a stroke of 5 meters, it worked massive iron and steel shafts, piston rods, and other forgings for fifty-four years, until its retirement in 1930. M.M. Schneider & Co., designers of the Creusot Hammers, joined an international family of pioneers in steam hammer building, including Nasmyth of England, Krupp of Germany, and Sellers of the United States. Steam hammers helped to increase industrial capacity while decreasing the burden on industrial workers throughout the world. 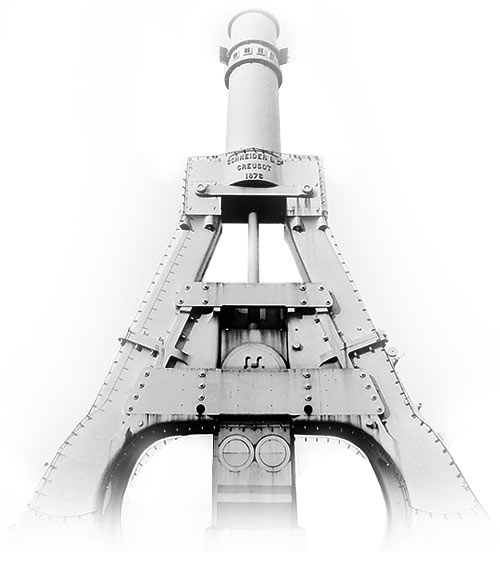 The hammer is composed of four distinct parts — the foundation including the anvil, the legs, the steam cylinder and its valves and linkages, and finally, the active mass itself — the piston, piston rod, hammerhead and die.